An American Tail Wiki
Register
Don't have an account?
Sign In
Advertisement
in: Antagonists, Villains, Characters,
and 2 more

T.R. Chula is the secondary antagonist of An American Tail: Fievel Goes West and the recurring antagonist in Fievel's American Tails. He is a spider and he had the appearance and mannerism of an Old West outlaw. He is the henchman and a right-hand man to Cat R. Waul.

He is voiced by Jon Lovitz in An American Tail: Fievel Goes West and Dan Castellaneta in Fievel's American Tails.

T.R. Chula first appeared in An American Tail: Fievel Goes West alongside Cat R. Waul during the cat attack on Fievel's neighborhood. His appearance gave Tiger what can best be described as a panic attack.

He is next seen playing cards with some of Cat R. Waul's henchmen. He cheats because he has eight sets of aces. This is proven when One Eye says he's played his last hand, to which he says "I don't think so. I've got seven more, dog chow!". As the cats complain of how Chula cheated, Cat R. Waul begins to explain his plan and the fact that they will get rid of the mice when the cats' empire at Green River is complete and when they have a better mousetrap so that they might dine on mouseburgers which Chula and the other cats shout with glee. As Cat R. Waul prepares to enjoy the train conductor for dinner, he asks Chula to turn on the phonograph so that the music will aid the digestion. However, Fievel who heard everything that the cats said accidentally loses grip on the falling false cowboy, which Cat R. Waul accidentally eats. He soon captures Fievel and after thinking about it lets Fievel go.

However, Cat R. Waul realizes that Fievel knows too much. In order to deal with this predicament, he sends Chula with orders to give him the 'flying aah' and make it good. Chula kidnaps Fievel. This gets Chula very excited, as he says "I love the 'flying aah'!". After bewildering a few cows, he chases after Fievel. Yelling "Mouse overboard", he grabs Fievel and sends him flying off of the train. Presumably, he returns to Cat R. Waul. He is later seen with Cat R. Waul when he gives his speech to gain the mice's trust.

He is next seen in Cat R. Waul's saloon, when after getting stabbed by Fievel with a fork Cat R. Waul says "I want the subversive who attempted to assassinate me found!". When Chula asks what a subversive is, Cat R. Waul says "Someone who doesn't have very long to live." Fievel accidentally reveals himself and, after Cat R. Waul abandons him to find the source of the singing he heard, Chula captures Fievel in a glass bottle and goes to cook Fievel alive.

Later, Chula goes to cook Fievel on a candle. However, Fievel makes his cooking difficult. Fievel escapes when his sister's singing breaks the bottle he is trapped in. Chula chases after his captive, following him upstairs into the human portion of the saloon and after getting covered in beer corners Fievel behind a bottle of perfume. Fievel escapes by spraying Chula with some perfume, temporarily blinding the fiendish spider.

Chula is last seen holding Miss Kitty hostage, telling Fievel that he'd better not pull the trigger of the large gun that Cat R. Waul had. If he did, Chula made it clear that he'd kill Miss Kitty. Seeing this, Tiger is enraged and overcoming his fear of spiders and goes into a blind fury, tossing all of the Cactus Cat Gang onto the giant mousetrap Cat R. Waul had set up. With the cats dealt with, he goes to save Miss Kitty. Chula tries to get him to back off by spitting a web in his face, but this turns into his undoing: Tiger grabs it and, using it as a piece of rope, sends Chula flying onto the giant mousetrap. Fievel then fires the gun, activating the mousetrap and sending the entire Cactus Cat Gang including Chula flying into a U.S. mailbag.

Chula would later appear again as Cat R. Waul's henchman in Fievel's American Tails. In the show, he is more tamed and nowhere near as insane as he is in the film. He simply serves the role as the generic unintelligent henchman found in most Saturday morning cartoons. Appearance wise, he goes from being gray to bluish purple. It is implied in the show that he only does evil things because Waul tells him to, whereas in the film he enjoys acting evil. This is best illustrated in the episode "That's What Friends Are For", when Chula becomes lonely while Waul is away, he actually attempts to befriend Tiger and Fievel, completely contradicting his characterization in the film. But when Waul returns, he decides to betray Fievel's trust by luring him into a trap, again only because Waul told him to do it. 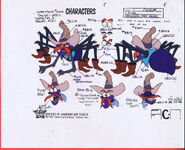 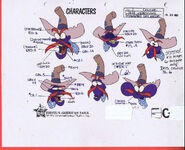 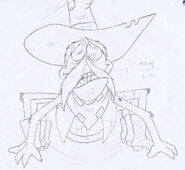