Voiced: Tony Toponi, in his every appearance (save for non-speaking cameos).

Also Appears In: Thumbelina, The Pebble and the Penguin, Extreme Ghostbusters, The Tick, The Smurfs

Pat Musick is a talented voice actress, and was able to make Tony a very charismatic and convincing character. When coming up with the voice for Tony, she said she based him on a childhood friend of hers, and we can guess based on the fact that she came back to voice him in the 3rd and 4th movies that he must have been a favorite of hers to voice. Besides voicing Tony, she has a quite prolific resume when it comes to voice acting, and is able to voice a variety of characters. Notably, she voiced different characters for at least 12 shows while the 2nd film was in production between 1990 and 1991, which caused Tony's role to be reduced as a background cameo in that very film. Due to her personal reasons involving her then-recent parenting of her daughter Mae Whitman (who was 3-4 years old at the time), Tony was dropped from the short-lived 1992 TV series, as the creators felt that Musick is the only voice right for Tony.

Her daughter, Mae Whitman, is an actress who does both live action and voicing roles, notably giving Tinkerbell the only voice she's ever had, at least in Disney productions. 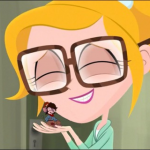