Little Mouse on the Prairie is the third episode of the series Fievel's American Tails. The title is a play on the "Little House on the Prairie" series. It is often considered a "lost episode", as it saw a very limited home video release in English-speaking countries. This is unfortunate, as it is also probably the most action-packed episode of the short-lived series.

At the beginning of the episode Fievel plays with his friend Jack's boomerang, but Jack has to go so he allow's Fievel to borrow it. Fievel throws it again, and it lands in a barn, near Cat R.Waul, Sweet William's gang and Chula the Tarantula; there he sees Chula and Waul cheating in a gambling game with them. Fievel tries to pull the boomerang out of a wall, but accidentally cuts Chula's web, exposing their cheating. The boomerang lands in Waul's front pocket. Sweet William's gang chases Waul and Chula to the river, so Fievel makes an appointment with his feline friend Tiger to take a stagecoach to the river and get the boomerang back, but his parents only allow him to go to the river -ignoring why- if he takes his sisters along because they're busy with work. In the desert, Sweet William's gang chase Waul and Chula around until they jump onto the very same stagecoach Fievel is riding in with his sisters, and then the stagecoach rides through the water, making it very dangerous for the mice as the water rises. They get washed out of their compartment and into the river, but are able to grab Tiger's tail and he pulls them up to the top of the stagecoach. However, Waul and Chula find them. Tiger runs away because he's afraid of spiders, leaving the mice to fend for themselves against a hungry cat and tarantula. But the road gets bumpy, and Waul and Chula fall off the stagecoach, as do the Mousekewitz siblings and Tiger; but they end up separated.

As if that weren't troublesome enough, there's a hungry cougar around and it chases the Mousekewitz siblings into a hollow log. Tanya chases the cougar away with her voice, luckily. Waul returns, and Fievel demands the boomerang back; but Waul has no idea the boomerang is in his pocket, and he wants to make lunch out of Fievel and his sisters. but Tiger appears and rescues them by tripping over the log and rolling them into the river. It then goes to that night, where everyone is lost in the desert trying to keep warm. Back home Papa and Mama Mousekewitz start to worry about their children. In the morning, Waul finds them and offers to join forces. But Tanya doesn't trust him, and since Fievel was hiding in a bush she pretends that Fievel died in the river, so that he can rescue them if something goes wrong. Mama and Papa then go out to search for their kids. Of course, Waul betrays everyone and has Chula tie them up, not knowing Fievel's still alive. Fievel rescues everyone while Waul's not looking and demands the boomerang. Waul finds the boomerang and tosses it away, but the boomerang accidentally awakes a nest of rattle-snakes, before coming back to hit Chula before he eats Yasha. This forces Waul to reluctantly join forces with the Mousekewitz siblings in order to get away from the snakes and make it out of the desert alive.The snakes chase everyone to the edge of a cliff, where below a stagecoach is riding by. Fievel tells Chula to spin a web, and he ties it to the boomerang, throwing it to a distant cactus. They use Waul's cape and zip-line across the web onto the stagecoach. When the Mousekewitz siblings arrive back in Green River Waul has the chance to eat the entire family, but is stopped by Sweet William's gang, who beat him and Chula up. In the end, Fievel finally returns the boomerang to Jack. 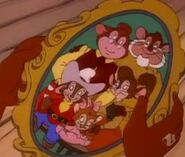 Mama holding the family portrait while worrying about her kids. 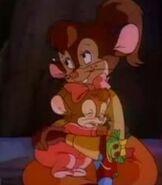 Tanya and Yasha camping in the desert overnight 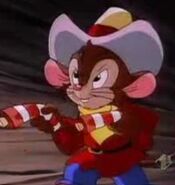 Fievel with his pistols drawn
Add a photo to this gallery
Retrieved from "https://anamericantail.fandom.com/wiki/Little_Mouse_on_the_Prairie?oldid=7877"
Community content is available under CC-BY-SA unless otherwise noted.