The Lenape Mice (pronounced Leh-nah-pey), also known to Europeans as the Delaware tribe, appear in An American Tail: The Treasure of Manhattan Island, and are an underground remnant of the indigenous mice which originally inhabited the area of New York. They are based on the human Lenape, and are said to have lived among them originally before their human counterparts were driven out by European settlers. They are sometimes referred to by fans as the "Lemouse", though this term is never used in the film itself.

At the end of The Treasure of Manhattan Island their Chief seals the main entrance to their underground village and they return to exile underground because it is evident that the European mice are not ready to share the Upper World with them. It is implied they have other secret passages to the surface, however their absence in the following film can be explained by their exile, as well as being written off for political purpose.

As is stated by Chief Wulisso, the Sakima of the underground New York Lenape clan, "Our ancestors watched as the European settlers came in their boats, bringing disease, gunpowder, cats. Our ancestors watched as the Europeans mistreated the Lenape. Killed many, scattered the rest. Our ancestors did not wait for the European mice to do the same to them." The human Lenape of real life occupied an area stretching from modern-day New Jersey to Connecticut, including much of what is now the New York state. The mice living among them seem to have adopted most of their customs and way of life, as is typical of mice in the An American Tail universe. At some point approximately 200 years before the events in The Treasure of Manhattan Island (the 1680's), the Lenape mice moved into underground caverns beneath what was then New Amsterdam, protecting it with secret passages and booby traps. They preserved their history on an elaborate painted wall with pictograms at the entrance to their hideaway, and in an intricate bead tapestry known as "wampa", their greatest treasure.

The Lenape mice are wary of outsiders from what they call the Upper-World, but if it can be proven that they mean no harm, the Lenape can be very hospitable. When Fievel's expedition finds them, they accept his mother's matzo ball soup as a peace offering, appoint the Chief's daughter Cholena as their guide, and have a grand feast with dancing around a fire. The Sakima Wulisso then performs a ceremony in which he sprinkles sand into the fire and calls upon the spirits of the Earth to embrace their guests.

They do not take kindly to thieves, as is seen when Scuttlebutt is caught stealing from the tribe. He is, however, forgiven. The tribe is pacifistic, despite the violent booby traps protecting them, and the fact that they wield spears when Fievel's expedition is caught in their net. When invaded by the NYPD, their only retaliation is throwing berries and shooting seeds, as they have forgotten how to fight. Wulisso secretly kept a bomb in case the need ever arose to collapse one of the underground passages to the tribe's hideaway, but they appear to have many other ways of visiting the Upper-World.

They have their own language (in fact several times in the film, actual real life Lenape words are used, such as "pula-ook" for turkey), but appear to speak fluent English as well; or at least, Wulisso, Cholena and Tankho do. Their writing system consists of pictograms.

The Lenape survive by growing crops with an underground water source, mainly tiny melons and berries. It isn't explained how this is accomplished without sunlight. They live in tents or tipis. The Lenape travel their village using a series of baskets hanging from ropes on the ceiling.

There are implied to be many passageways leading to the hideout. Beside the one beneath the Beach Pneumatic Railroad, which is flooded at the end of the film, another is shown hidden in a statue in Central Park. The hideout is protected by a long hallway filled with booby traps; falling hot coals triggered by a pressure pad, rows of swinging hammers, a treadmill with spikes, automated arrows which shoot from a pillar, and rotating blades with mouse skulls on top. These booby traps may be bypassed by pressing a red paw located on the painting at the entrance.

Buildings in the Lenape hideout.

The Lenape mural at the entrance

The Lenape's greatest treasure (first half) 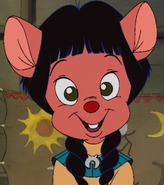 A secret entrance in a statue
Add a photo to this gallery
Retrieved from "https://anamericantail.fandom.com/wiki/Lenape_Mice?oldid=10583"
Community content is available under CC-BY-SA unless otherwise noted.