Profiles on characters in the TV series Fievel's American Tails.

Characters With Their Own Pages

Characters Exclusive to the Series

A lawmouse-for-hire and hero to Fievel and Tanya who cleans Green River of Sweet William's gang– from "Mail Order Mayhem". A caricature of Clint Eastwood.

The town blacksmith and Jack's father, an Australian mouse. He likes to wrestle crocodiles and talks about doing so often. A caricature of Crocodile Dundee, and quite possibly inspired by Jake from The Rescuers Down Under.

A traveling self-professed "doctor" with a top hat and a southern accent, modeled off of the stereotypical snake oil salesman often seen in the Western genre. He gave away hiccup sweets and tried to sell everyone in town a placebo cure. Appears in "A Case of the Hiccups".

One of Fievel's school mates, who enjoys playing with his boomerang, and is seen hanging out with Fievel on occasion. Most likely from Australia, unless born in America to Australian parents. He bares a slightly closer resemblance to Tony Toponi.

Another one of Fievel's school mates.

A girl in Fievel's class, with light tan fur and blonde hair, and a southern accent. She attempts to read "Mary had a Little Lamb" with the hiccups in "A Case of the Hiccups" and gets laughed at.

The school teacher, probably a mole, who runs the schoolhouse. He is interested in the education of Green River's youth, and encourages Tanya on her path to becoming a singer.

Owner of the general store in Green River. He has a German accent and a cranky demeanor, though he seems to be good friends with Papa Mousekewitz. He and his son Sydney don't seem to be mice, lacking big ears and long tails, so are probably some other type of rodent.

An elderly prospector mouse, who is well-versed on the history of Jeremiah's lost gold mine, and convinces Fievel to discover its whereabouts. He actually first appears during the song Way Out West from An American Tail: Fievel Goes West. From "The Lost Mother Lode".

The baker. A caricature of Ona Munson's Belle Watling from Gone with the Wind.

Fievel's classmate, who bullies him often, makes fun of him, and lies to get Fievel into trouble. He is ungrateful when Fievel rescues him from Cat R. Waul too. Son of the shopkeeper Mr. Schimmel. He bares a slightly closer resemblance to Roc (one of The Bullying Orphans). 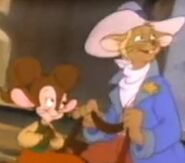 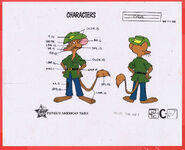 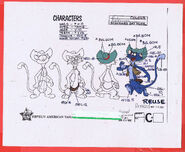 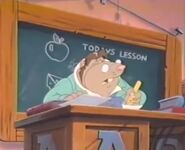 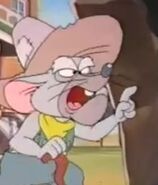 Sydney Schimmel
Add a photo to this gallery
Retrieved from "https://anamericantail.fandom.com/wiki/Characters_in_Fievel%27s_American_Tails?oldid=10811"
Community content is available under CC-BY-SA unless otherwise noted.