An American Tail Wiki
Register
Don't have an account?
Sign In
Advertisement
in: Characters, Cats, Villains,
and 3 more

Cat R. Waul is the main antagonist in An American Tail: Fievel Goes West, voiced by former Monty Python member John Cleese in his first voice-acting role. He is an evil cat and the leader of the Cactus Cat Gang. Waul is a cat of wealth and class, who loves to eat mice, and dislikes humans, especially his buxom owner. His main goal is to turn the mice from Green River, except Tanya Mousekewitz, into mouseburgers.

His plan was to orchestrate a cat attack on the mice of New York and then entice them in the sewers in order to trick them into moving out west using a mouse cowpoke marionette. Once gaining their trust and making them think Green River was a place where cats and mice peacefully coexist in harmony, he was going to kill them all with a giant mouse trap at the grand opening of his saloon and turn them into "mouse burgers." Fievel heard about his devious plot on the train, and he was pulled down to Cat R. Waul's paw. The boss tortures him with butter sauce and is about to eat him, but he realizes that his family will miss him and look for him if he eats the young mouse, so he decides to let him go. He told his spider lackey, T.R. Chula to give him "The Flying Ahhh!" and make it good, and Fievel is kicked off the train.

Later, while selecting someone to sing on stage at his saloon, Cat R. Waul was poked in the butt with a fork by Fievel, and he flew through the roof where he was cuddled and smothered by his owner's bosom. He sees Fievel and tries to eat him again, but he hears Tanya's beautiful singing voice while she sings "Dreams to Dream". Rather than eat her he decided to keep her alive and puts her on stage. Later, when he is about to unleash the giant mouse trap at the grand opening of his saloon, Fievel, Tiger and the former sheriff Wylie Burp show up to save the day. At one point in the ensuing shoot-out Cat R. Waul had the mice cornered and was about to shoot them, but Fievel had him and his gang in the giant mouse trap, and Cat R. Waul, Chula, and other members of the cactus cat gang were catapulted out of town and into a mail bag. Cat R. Waul swore vengeance, but was pulled into the train and cuddled again by his owner affectionately after being stripped of his regular attire and adorned in a baby bonnet, bow, and booties.

Waul is also the main villain of Fievel's American Tails. In this show, he's returned to Green River to carry out more evil deeds, usually trying to trick the mice of Green River into falling for one of his traps. But he is easily defeated. His appearance is mainly unchanged, although his eyes are blue instead of green like in the movie. His base of operations seems to be out of a funeral parlor, where no humans are ever seen. By this time he's lost control of his gang, with Chula the only one still following his orders through allegiance alone. He sometimes convinces Sweet William and his gang to participate in his schemes, but when the schemes go awry they turn on him immediately. He actually comes very close to devouring the entire Mousekewitz family at the end of "Little Mouse on the Prairie", only to be stopped by Sweet William's gang beating him up over being cheated in a gambling game. 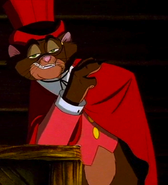 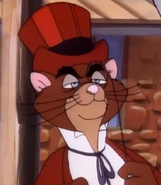 Cat R. Waul as he appeared in Fievel's American Tails