Babysitting Blues is the seventh episode of Fievel's American Tails.

The photographer is coming to Green River. But Papa and Mama's clothes is still at the tailors, and Tanya is at Music School. Fievel is stuck with the chore of watching Yasha, and he has a lot to learn about babysitting. First he decides to ditch Yasha by playing hide and seek with her, and then going off to read Montana Mouse comics instead while she wanders off, messing the house up. Fievel hears crashes and goes outside to look for Yasha, but is locked out. When he tries to get back in with the help of Tiger, he falls into a barrel...while Yasha opens the door and crawls outside, wandering into the great unknown!

Yasha eventually wanders into the lair of a cat gang, headed by a muscular brute named Sweet William. At first he wants to eat the little morsel, but he is soon won over by her babyish charm and decides to keep her as a pet, growing fond of her. While he beats up on his lackies for even thinking about eating Yasha, Fievel discovers her and sneaks in to rescue her. But Sweet William finds him. Luckily, Tiger helps Fievel escape their clutches. So, they think that they've rescued Yasha, and all is well. But...during the ride back, Yasha sneaks out of Fievel's book bag, and jumps off into a pile of leaves!

This time, she crawls straight into Cat R. Waul's hideout, right as he's complaining about how hungry he is for the taste of mice. When Chula discovers her, he decides to use her as bait to lure bigger mice into his hideout. But when Yasha bites his nose and he yelps in pain, Sweet William overhears, and comes barging into Waul's hideout looking for 'his' mouse. While the two are arguing, Fievel comes in and attempts to rescue Yasha from the glass jar Waul placed her in, only to have it fall on top of him while Yasha crawls away. It looks like the end of the line for Fievel, until Tiger rushes in and announces he just saw Yasha, causing Waul and William to go rushing out to find her first. Tiger rescues Fievel and the two go looking for Yasha again. When they find her, she's crawling onto a teeter-totter-like wooden board. Just then William finds her too, and as Tiger and William rush to capture Yasha first they inadvertantly sent her rocketing into the air across town, landing in a mail bag for the railroad. Fievel rushes to her aid, and just narrowly rescues her as the train comes by to swipe the mailbag. But as he climbs down the wall Waul grabs Yasha, saying he's going to eat her. But before he does...Sweet William arrives, and he pounds Waul into a pulp. Yasha lands in Fievel's arms, and William regretfully lets Fievel take her, parting ways with his pet. The episode ends with the Mousekewitz family taking their portrait. 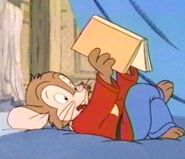 This is a (1992) Cell from this episode when Fievel was trying to warn Cat R Waul about Yasha
Community content is available under CC-BY-SA unless otherwise noted.
Advertisement