The An American Tail Theatre ran from 1990-1997 at Universal Studios Hollywood and Orlando. It featured performers in costume and a gigantic animatronic puppet of Tiger. The area where the show took place is now occupied by the Despicable Me show building.

The live show featured a musical, heavily abridged retelling of An American Tail and An American Tail: Fievel Goes West. A recording of the soundtrack for the show was made available as a free download on the Universal Studios theme park website for many years. This version was the one used after the release of Fievel Goes West. Of the voices, it would seem only Tony and Tiger sound close to their original voice actors. The plot, such as it is, has Fievel's family arrive in New York, where they celebrate Fievel ridding the city of cats. Tiger appears and gives everyone a scare, until they realize it's only him. Then, it transitions by having Fievel declare he wants to move out west, and because Fievel wants to his family promptly does so. Then, everyone sings and dances, and the live show ends. The songs included:

The ending includes a mixture of all the songs, with some new lyrics thrown in at times. For unknown reasons Tanya does not sing on the soundtrack, though photos show someone costumed as her was present at the shows.

At Universal Studios Florida, there was an earlier An American Tail Theatre show where Fievel, Tanya, Tony, and Bridget were the main performers and convinced there were no cats in America and when they went to different cities (San Francisco, Detroit), a gang of cats would come their way. The characters would also sing songs that were popular in the time frame from when the movie was made (Get Up On Your Feet, Dancing In The Street) 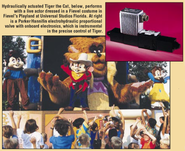 A magazine article about the live show.

How the giant Tiger puppet was constructed 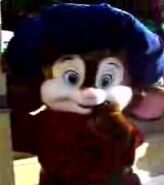