An American Tail the Video Game was released for the Playstation 2 console in 2007, only in Europe, developed by Data Design Interactive, who secured the rights from Universal to make the game. It's a relatively rare game, that ironically was never released in America. It is based on the first An American Tail movie.

"Fievel Mousekewitz and his family have left their home in Russia for a new life in America, but when a storm hits their ship bound for New York, Fievel ends up getting separated. Feeling lost, alone and very scared is only the start of Fievel's problems. New York City is teeming with big cats who love to prey on mice. Can you help Fievel defeat the feline foes and find his family? Help the little mouse out in this platform action game based on the ever popular movie." -IGN.com 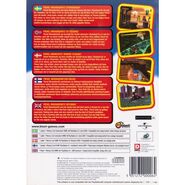 The sewer level
Community content is available under CC-BY-SA unless otherwise noted.