An American Tail: The Treasure of Manhattan Island

Of note is that the film takes place in New York, which either retcons the events in which the Mousekewitz family leaves New York, or just means that it takes place before then. This is addressed directly near the beginning of the film, when Fievel says he had a dream where he moved west, as well as the mice singing about staying in Manhattan.

The story begins with some mice coming into New York on cab. The mice in New York are singing We Live In Manhattan while working, giving the audience a sense of the setting.

In the morning, Fievel Mousekewitz and Tanya Mousekewitz try to wake up Papa Mousekewitz. Papa has trouble getting up because he's getting old, and he grumpily snaps at Tanya making her upset, but they soon get along and Papa apologizes, thanks to Mama Mousekewitz. Papa is working with Tony in Cheese factory, owned by three wealthy and evil mice.

Tony takes Fievel into an abandoned subway to look around, and when Tiger accidentally activate one of the trains a secret chamber opens up and in it Fievel and Tony discover a map. Tony decides to take it to Dr. Dithering, a scientist in archaeology he used to work for. However this makes Tony late for work. When Tony arrives late at work, the three factory owners decide to punish him by not giving him his payment, but Papa convinces them not to fire Tony. After studying the map, Dr. Dithering decides to take Fievel, Tony and Tanya to underground to find what he believes will be a lost treasure. Dr. Dithering has an assistant name Scuttlebutt, who is in fact spying on professor for three factory owners. Also on the side of the villains is also Chief McBrusque, chief of New York's police department. McBrusque is getting bribed for keeping mice in factory silent.

The following morning at the factory, mice are striking, but they are stopped when McBrusque and his police officers beat up one small glasses-wearing mouse, who was the loudest. Papa is angry, but can't afford to have problems with the police.

Meanwhile in an underground tunnel, Fievel, Tiger, Dr. Dithering and others discover that under New York live Indian mice, remnants of the Lenape tribe. Fievel meets Cholena, the cute and sweet daughter of Indian chief.

Fievel tells her that they think Indians pose treasure, but she tells him that their only treasure is their land.

Cholena decides to go on surface, to see if the Europeans have changed their ways and will let the Lenape live in peace. Meanwhile, Scuttlebutt reports to evil factory owners about the Indian village. The owners decide to give a speech to their workers stating that the Lenape are a threat, and that causes mice to get in angry mob. They go to museum, and kidnaps Dr. Dithering, and bring him to Sweat shop, where factory owners and police prosecute him. Papa manage to escape from McBrusque and his men. McBrusque is prepared to kill Cholena, but is stopped by Fievel and Tony to save Cholena's life.

Meanwhile at the butcher shop, Dr. Dithering is put on trial for cooperating with Indians, and police are determined to kill him with meat grinder for crushing meat. Papa goes with Tiger, who rescues Dr. Dithering and fights off the police. Papa then explains the mice who actually are their enemy is the factory owners, not the Indians. The mob goes after the owners, but police block the exit.

The owners ordering McBrusque and his men to kill everybody in the Indian village, and steal their treasure. Fievel and the gang manage to get there before police, and to make a strategy. When police arrive, Indians and Fievel's gang fight them off for defense. All the policemen run away. The Indian chief tells Fievel that he and his friends have to destroy entrance into the village, from the surface, and gives them the exploding device called the gunpowder bomb.

Fievel, Tony and Tanya start to light the fuse, but they are ambushed by McBrusque and Scuttlebutt who grab Fievel and Tony. After Tanya helps Tony and Fievel to fight and overpower McBrusque and Scuttlebutt, Fievel manages to set of the bomb and to destroy the entrance from the surface. This floods the tunnel, together with McBrusque and Scuttlebutt as they fall into the chasm to their deaths. Tony and Tanya manage to reach higher ground, but Fievel is carried off by the current. When the water recedes, Tanya and Tony desperately search through the mud to find him, before giving up. But just then, Fievel breaks through the surface, and they all three share a muddy group hug, thankful that everyone survived.

On the surface, the mice have elected Papa as their first Worker union president. The cruel owners are complaining how there are many ways to skin the cat, but are interrupted by Tiger, who is now new Chief of New York police to keep everything peaceful.

Dr. Dithering gives Fievel a telescope, and Fievel sees that Cholena and her people are on surface, waving goodbye to him before disappearing into a secret entrance on a statue.

The soundtrack was never released in any official format. Much of the background music is recycled from James Horner's scores for the first two An American Tail films, or are instrumentals of one of the three original songs from the film. Those songs are:

A version of Anywhere in your Dreams without any background noises or vocalizations was made available as a sing-along extra on the DVD. This was the first An American Tail film where the villain(s) was given a musical number.

The film was poorly received by audiences and currently has a 29% Audience Score on Rotten Tomatoes. A common criticism of the film relates to its direct-to-video animation quality. The film has proven to be divisive within the fandom. Many fans appreciate that most of the voice cast from the first film returned and that it was closer in tone to the original, and some praise it for including more mature themes than many DTV films of the time. However, Fievel Goes West was the better-received film with most audiences, and this movie's attempt to retcon that film into a dream angered some fans. Also, some fans take issue with the changes made for the franchise’s original characters, deliberately ignoring the continuities from the past films. Some of the new characters, such as Cholena, were considered among the highlights of the film, and Elaine Bilstad was praised for her voice performance. The villains of the film received mixed reviews. They were considered racist and too mature for a kid's film, however, the voice actors were praised for their performances (most especially Tony Jay and Ron Perlman).

As far as sequels to Don Bluth films go, there are films with much worse reputations, such as The Secret of NIMH 2: Timmy to the Rescue. Even Common Sense Media received negative attention with the politically sensitive elements in the film. [1]

The subplots in this film are subjects of racism, police corruption, and worker's rights. This even includes Native American stereotypes involving the Lenape mice, with their furs reflecting the skin color of actual Native Americans, which are deemed insensitive in today's society.[2][3] These concepts are mainly condemned from children's media today.

Fievel skipping while talking to Tony 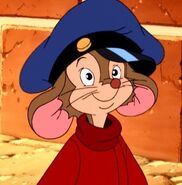 Tony sees Cholena the first time; The only sequence Tony speaks in Italian

Fievel and Cholena singing "Anywhere in Your Dreams"

Fievel looks through the telescope (last scene in the film)

Detail from back cover

DVD game that comes with the film 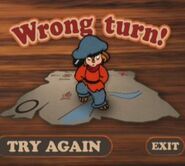 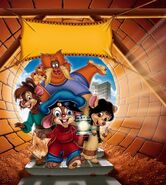 Advertisement of the movie from the inside An American Tail VHS cover from 1998 (while the film was in hiatus).
Add a photo to this gallery

Retrieved from "https://anamericantail.fandom.com/wiki/An_American_Tail:_The_Treasure_of_Manhattan_Island?oldid=10601"
Community content is available under CC-BY-SA unless otherwise noted.