An American Tail: The Mystery of the Night Monster

An American Tail: The Mystery of the Night Monster was the second direct-to-video sequel to An American Tail: The Treasure of Manhattan Island and the final chapter of the An American Tail tetralogy, starring Thomas Dekker as the main character, the young Fievel Mousekewitz. This film was released on July 25, 2000 in the US. The negative reception from film 3 may have caused Universal Studios to cease production on the franchise, but did managed to do the final chapter. Stricter changes were made, as characters and elements from the previous film are omitted for political purpose. Changes were also made for some of the original characters as well.

Note: This marks the last role for Nehemiah Persoff for voicing Papa Mousekewitz in a film before retiring from acting to become a full-time painter.

It is also the final time Dom DeLuise voiced Tiger before his death in 2009.

Set in between the third film (Late 1880s) and second film (1892), Fievel Mousekewitz, his friend Tony, and his sister Tanya Mousekewitz, all get jobs at the local newspaper, where the audience is introduced to Nellie Brie, who wants to be an important reporter, but only gets small assignments, as if she were a secretary to Reed Daley, the newspaper's editor. Throughout the film, Tanya Mousekewitz tries to win Reed's heart, while Tony tries to get noticed by Reed and promoted to a reporter. Like in the previous movies, where a mouse installation is directly below its human installation counterpart, the newspaper offices the mice work in is directly underneath the newspaper offices the humans work in.

Nellie gets a chance when she is assigned to report mice who disappear overnight into holes that open up on their floor all over New York. Reed makes up a, as Nellie calls it, "so-called monster" that lives under the city and takes mice away during the night to add more excitement to the otherwise unimportant story, intending to sell more papers. The Night Monster instills fear in the readers, as could be expected. Fievel begins having nightmares that cause him to lose sleep because of his fear of the monster; the film opens up with Fievel having a dream about being chased by what he thinks the monster looks like. When, through Tanya, he is assigned the job of following Nellie and drawing up interpretations of what the monster looks like based on witness testimony, this makes his insomnia all the worse. A particularly suspicious miniature French poodle named Madame Mousey, who has started living among the mice about this time, appears at every crime scene, claiming to be a fortune teller. The heroes finally decide to investigate her by means of the "dog council" that meets at Central Park. They also search down one of the holes, which leads directly to a group of cats hiding in the sewers. Also, all the mice that had disappeared are being held in wood cages there, to be sold off to other cats and eaten.

The Night Monster itself, a mechanical device with ghastly flashing pictures and a buzz saw, is revealed in full when it attacks the mice newspaper office and printing press to prevent them from printing the truth, which they had just discovered. A great chase scene takes place throughout both the mouse and the human newspaper offices. Reed reveals that he was in love with Nellie all along, much to Tanya's intense dismay. When all the cats seem to be under control, the "dog council" appears just as they're regaining consciousness and chase them all away, taking Madame Mousey with them. The last scene takes place at the beach, where the audience is told that the "dog council" had chosen for the French poodle (who was the mastermind behind the night monster all along) a punishment worse than prison: returning her to her owner. Mrs. Mousekewitz, Fievel's mother, surmises saying that now that the mystery has been cleared up, Fievel may finally go to sleep, only to turn around and find him already asleep on the beach towel.

In comparison with the two theatrical features in the American Tail series, both direct-to-video releases falter in animation quality, as typical for direct-to-video cartoons. On top of that, Fievel's fur color was desaturated even though the rest of the Mousekewitz family have kept their original fur color. Which direct-to-video film has the better animation seems to be a matter of opinion, but this film did do a better job of the shots where the characters are tiny, along with keeping the humans seen from the neck down, with the exception of Madame Mousey's owner at the end of the film.

The film has an audience score of 40% on Rotten Tomatoes, beating The Treasure of Manhattan Island's score by 11% but falling behind Fievel Goes West's critic score by 10% (which has an audience score of 62%) . Common Sense Media gave it a positive review compared to its predecessor, describing it as "A mystery with spunk, courage, and heart" which encourages children to overcome their fears.

Within the fandom, it is not nearly as divisive as The Treasure of Manhattan Island , perhaps because it makes no attempt to neglect the continuities of the first two films, as well as improving some of the original characters’ appearances here. Madame Mousey was considered an enjoyable antagonist by fans and has gathered many fan art. This villain was also considered superior to the villains of the third film. The character of Nellie Brie was also well-received by fans. However, the film has been criticized for its animation, as was the previous film, and some fans took issue with Fievel's characterization in this film. Even if not finely made like An American Tail and Fievel Goes West, Thomas Dekker received a Young Artist Award for best voice-over performance for Fievel, which is the only direct-to-video sequel in the series that received an accomplishment.

Tony, Fievel and Tanya as they appear in the film 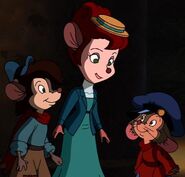 Nellie, Tony and Fievel after singing "Who Will" 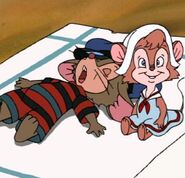 The final scene of Fievel in the An American Tail series 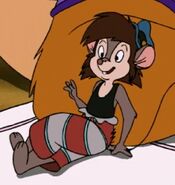 The first time Tony in a change of clothes; his bathing suit
Add a photo to this gallery

Retrieved from "https://anamericantail.fandom.com/wiki/An_American_Tail:_The_Mystery_of_the_Night_Monster?oldid=10572"
Community content is available under CC-BY-SA unless otherwise noted.