In 1992 Marvel Comics released a three-issue comic book adaptation of An American Tail: Fievel Goes West. It followed the basic plot of the movie, with a few minor differences, and seems to be based on an earlier draft of the movie's script. This three-issue series is adapted from Flint Dille’s screenplay and a story by Charles Swenson, and features art by George Wildman.

The titles of the issues were as follows:

Face off with One-Eye 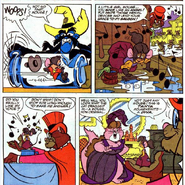 Off-Model artwork from the comic

Tanya continues to lust after Willie

Willie appears
Add a photo to this gallery
Retrieved from "https://anamericantail.fandom.com/wiki/An_American_Tail:_Fievel_Goes_West_(Comic_Book)?oldid=8444"
Community content is available under CC-BY-SA unless otherwise noted.