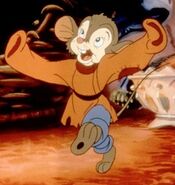 The debut of Fievel

Fievel about to be hit by a tidal wave

A cel of the bug-eating creature.

Final shot of the film

Artist Barry Atkinson with backgrounds from the film

Don Moore with backgrounds from the film

Movie poster with the lyrics of the song "Somewhere Out There"

Fievel plush doll, as a promoted item for the movie after its release
Add a photo to this gallery
Retrieved from "https://anamericantail.fandom.com/wiki/An_American_Tail/Gallery?oldid=10211"
Community content is available under CC-BY-SA unless otherwise noted.