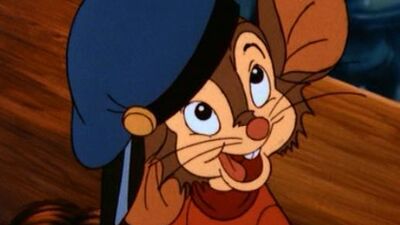 Fievel Mousekewitz is the main protagonist of the An American Tail series. He is the middle child of Mama and Papa Mousekewitz, younger brother of Tanya and older brother to Yasha. He is an adventurous mouse who often endangers himself through his reckless but mostly innocent actions. Fievel is...

Why isn't there any mention of the Fievel plush that contained a tape player and a tape featuring Fievel's voice actor telling the story?

This was the first American Tail film I saw on video when I was little and one that I really loved. After seeing it time and again as I grew up, I began imagining ways Fievel's scenes could be improved. For one thing, he could have had more memorable lines and a few actual musical numbers of his own. Since then I have been thinking up my own fan-edit screenplay with him having longer scenes, some better dialogue, and the inclusion two more Western songs that would fit even if they weren't written by James Horner and Will Jennings (one is originally by Riders in the Sky).